House Rules for Warriors of the Red Planet (Part VII)

December 02, 2022
My last post introduced a basic one roll mechanism for combat in a solo rpg loosely based on the Warriors of the Red Planet. My intent was to create a quick and easy combat system so that solo players could enjoy a game with fast-paced procedural play.  I paused a while to give it my ideas more thought. A 1 roll combat resolution would work well if there was 1 player and 1 enemy. A roll could be made to see if an attack was successful. The roll could be modified by player and creature strength, but essentially a high roll over a certain target number would indicate a player hit and damage on the enemy. A low roll would indicate the enemy hit and damaged the player. If the system was finely nuanced enough, a roll in between could be no result for either side. But this type of one-roll system raised too many questions for me to continue writing.  During a battle there are other actions to consider such as range attacks, special attacks, player or enemy movement, non-fighting actions su
Post a Comment
Read more

House Rules for Warriors of the Red Planet (Part VI) 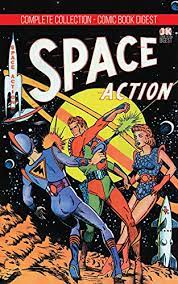 This is now the 6th installment of my posts related to my soloable game based on the Warriors of the Red Planet RPG that I'm writing.  If you read back on my previous posts, you will see this game aims to be a standalone game which strips out many of the OSR mechanics until what is left is a game of race or heritage as class (the game has no classes), a game of skills to adjudicate success or failure in game actions, and a game of character flaws. The band of adventurers will follow set turn procedures to go on a series of quests on a world map of the far off and mysterious planet of Ephaphus (which all residents are trapped in something of a 'snow globe.') The adventurers will try and save the world from imminent destruction playing Tellurians (Human-Like Off-Worlders), Xagzan (Humanish Sorcerers with two-hearts from beyond the warp gates), Anurans (Toad People), Grotto Kin (Humanish underdwellers who wield the power of immaterialisms with their minds),  and five other rem
Post a Comment
Read more

House Rules for Warriors of the Red Planet (Part V) 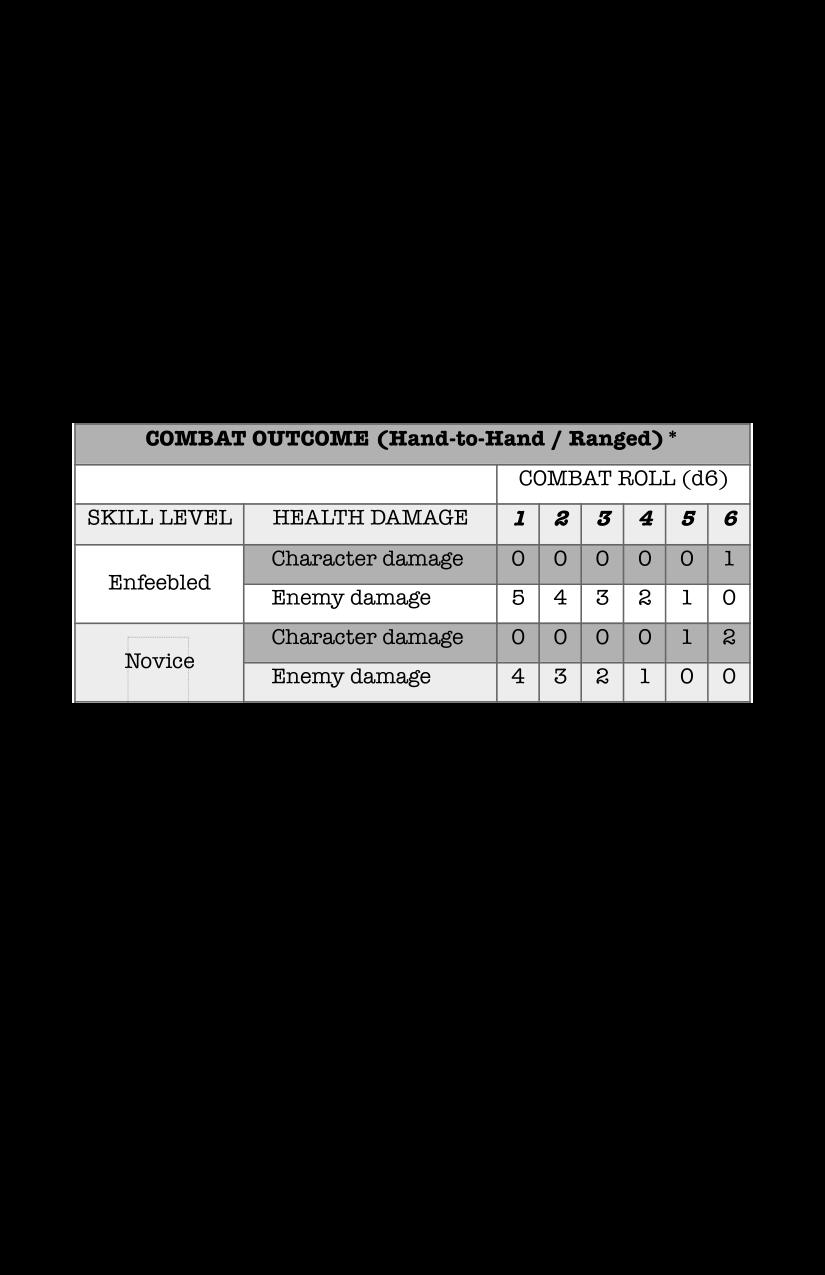 In my last post, I made a critical decision to not just create a soloable supplement for Warriors of the Red Planet RPG, but to make a stripped down version that would ultimately be a stand alone game. I entertained the following design philosophy: remove all OSR styles classes, and make everything "ancestry-as-class." remove all 3-18 range ability stats common to these games (and often seldom used). remove all the tricky dice and use only d6s remove the game referee from the game If you look back, you will see that my fancy Skill Ability only Ancestries template that I posted were not necessarily simple. Each Ancestry is unique and has many possibilities, so no two characters of one Ancestry will be the same. Now I've since gone on to refine all of these, and the final game will include 9 different Ancestries. As I was working on the game more the last two weeks, I had another thought experiment to add to my design philosophy: In a typical OSR, there is a to-hit roll for
Post a Comment
Read more

House Rules for Warriors of the Red Planet (part IV) 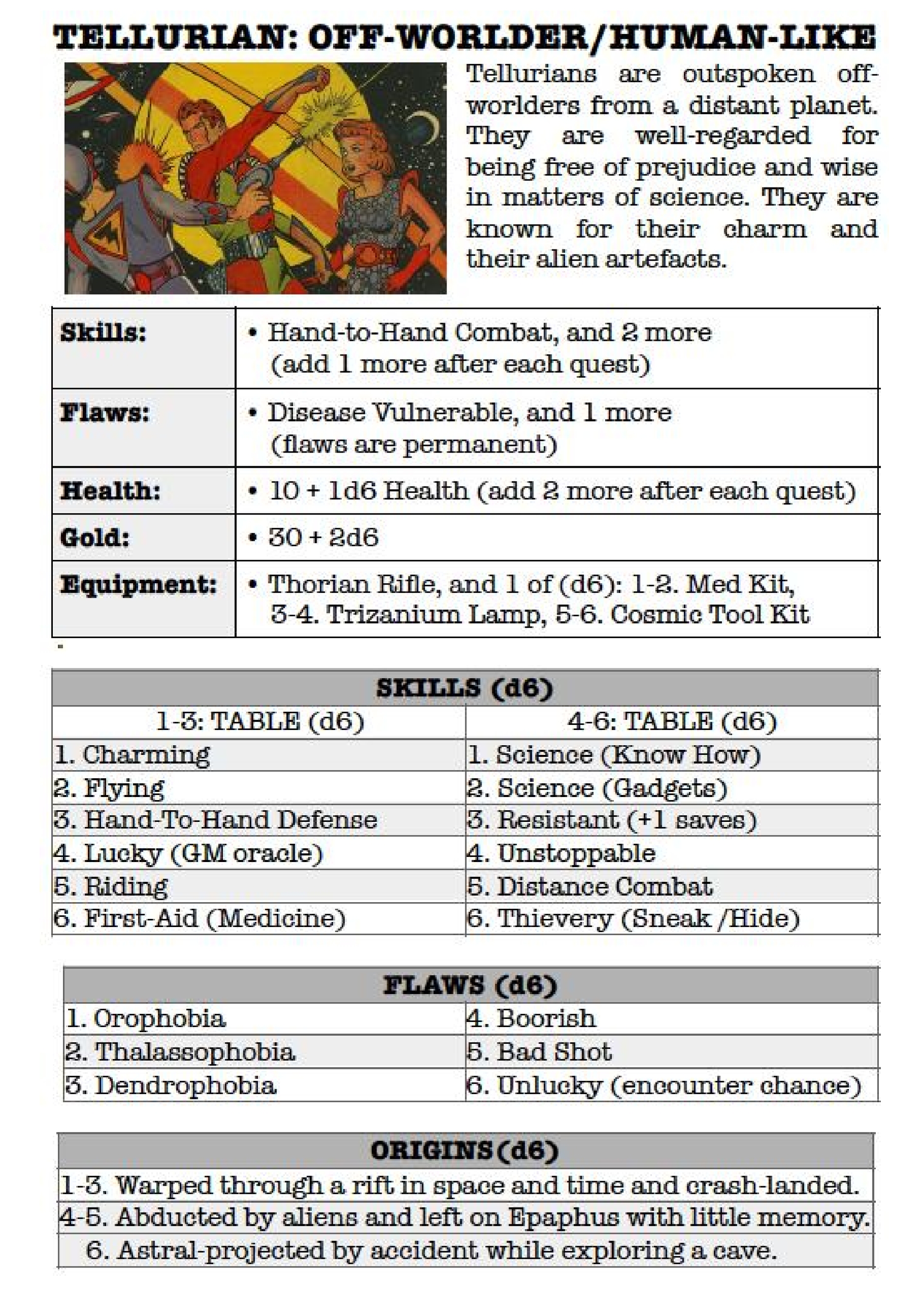 A wonderful aspect of OSR games like Warriors of the Red Planet (WotRP) is that the rules are broad enough that you can adapt, modify, or add to the material in the game. Making a setting is a great way to do this, and let's go even further by adding that OSR games are a great chassis, or base if you like, for developing your entirely original game. Last post, I introduced some purely OSR style ancestries/races to a supplement I was working on for my WotRP supplement, and felt that I was beginning to work the rules in such a way that the game was beginning to feel like mine. The act of creation is a pleasure when you can feel like the work you produce was done wholly by you. Then out of the blue these other thoughts kept creeping into my mind: the art that sets the mood for my work is public domain art by underpaid comic book artists who aren't in any sense on board with my project or getting credit for any of it. Also, I thought that it the end, people might be able to lop off
Post a Comment
Read more

House Rules for Warriors of the Red Planet (part III) 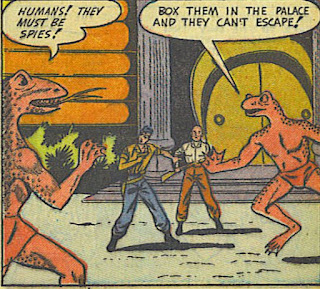 A Sword & Planet adventure is not complete without a myriad of strange new races of humans. In my last installment, I introduced the world of Cluros through a map that would represent an alternate setting for the Warriors of the Red Planet RPG. In this post, I wanted to go further by sharing some of the new inhabitants of this world. In this post, I give you three new races I planned to put in these rules, including: the Lacertilitan (Reptilian), the Anuran (Toadling), and the Great Brain.  LACERTILIAN: REPTILIAN Lacertilians are one of the only races indigenous to Cluros, but are similar to Reptilians found on other planetoids. Lacertilians are taller than Humans, and have a natural antipathy towards them. They share swamp and forest habits with their sometimes friend, sometimes enemy, the Anurans, but also can be found in drier desert climates. They are a warrior race made up of clans who honour the best warriors with leadership roles. They have sought alliances with Mantics and
2 comments
Read more

House Rules for Warriors of the Red Planet (part II) 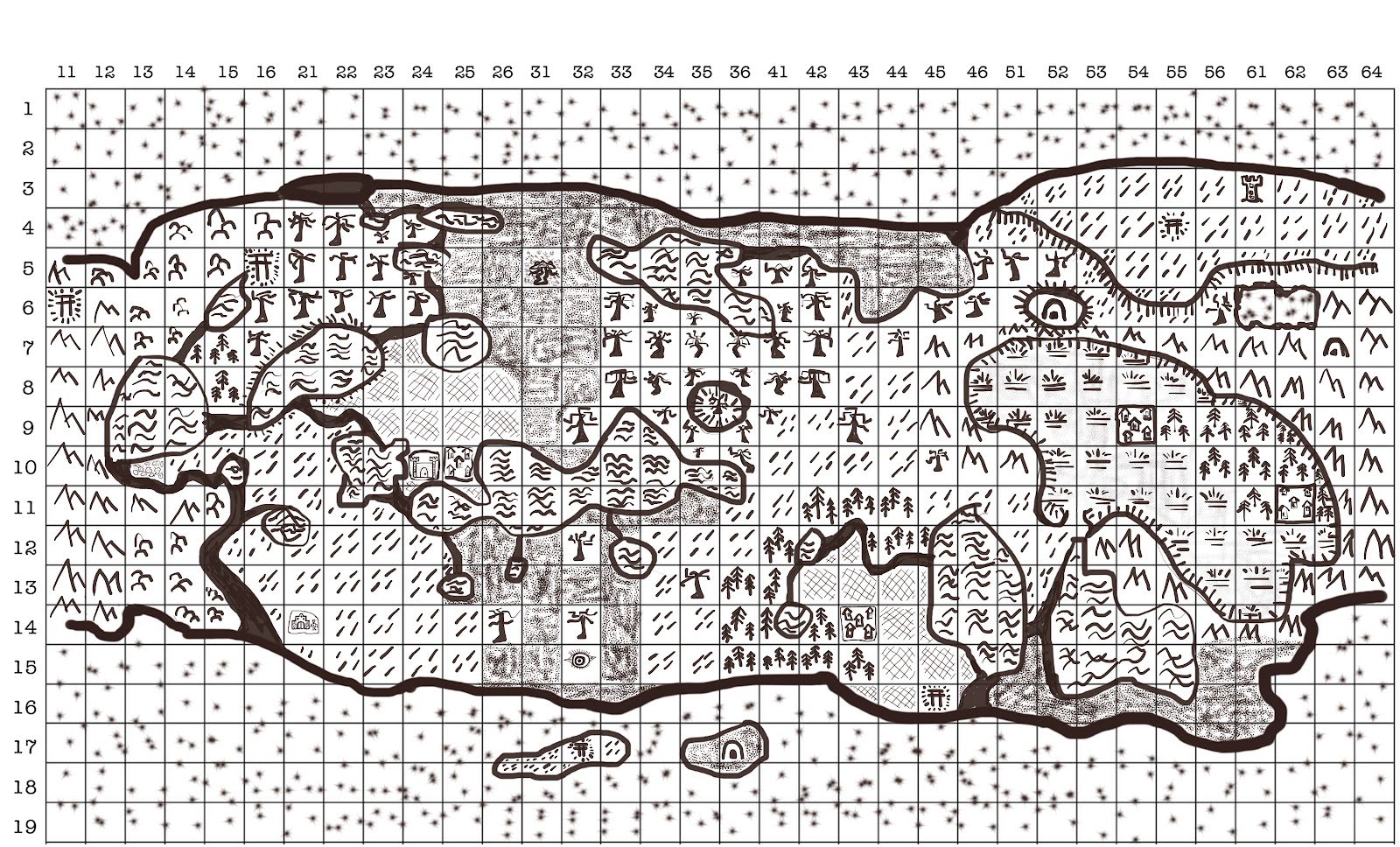 I've gotten deeper into my House Rules for Warriors of the Red Planet, and regrettably my Gaming Primitive project is at a temporary standstill until this is done. But I've made many interesting changes to the House Rules since my last post.  The setting will remain on the Martian moon Cluros (Deimos), and will be governed by the Edgar Rice Burroughs unique cosmic law known as the "compensatory habituation of masses." That is, objects approaching Cluros decrease to a proportional size, so that the small radius of Cluros will effectively become a large world ripe with opportunities for adventure. Once on Cluros, adventurers will be stuck in something of a snow globe. Leaving the land and entering the Cosmos will allow a star sailing ship to exit the bottom of the map and reappear on the top. The Cosmos also is slowly devouring the land. The Cosmos is dangerous because sailors need to wear sealed air helmets. The only way to escape Cluros or to save Cluros from the Cosm
Post a Comment
Read more

House Rules for Warriors of the Red Planet and Xuhlan

May 01, 2022
This blog is a departure from the solo adventure I was working on for Olde House Rules' Gaming Primitive RPG, but I think it will interest those who like 0e inspired, rules lighter RPGs. For this post I briefly discuss the Warriors of the Red Plane RPG, and post some house rules I've had kicking around on my hard drive for a while. While the Warriors of the Red Planet (WotRP) 0e inspired sword & planet RPG put out by Al Krombach & Thomas Denmark at Night Owl Workshop is excellent, this game in particular is destined to have some great House Rules. Night Owl Workshop already released an extra Princess Class, and rules for Social Standing for WotRP. Gunslinger, another Night Owl Workshop RPG, will be a companion book and full game in its own right when fully released. And, there is also Terje Nordin's wonderful WotRP house rules with his Swords and Super-Science of Xuhlan supplement, which adds much to the game. If you have not checked out WotRP yet, or other Night
Post a Comment
Read more
More posts